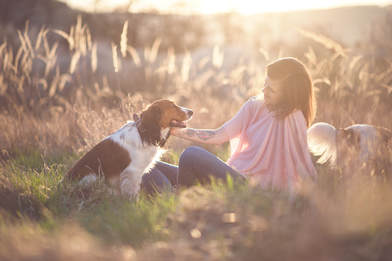 How we got the Kooikerhondje kennel
​
Stage 1: Something small & hairy
Our journey to the kennel started probably when I was born. I have always loved dogs and, in fact, all living creatures. My first dog was a dwarf, long-haired dachshund Rita. When I grew up, we got with my fabulous man, two small Yorkshire terriers into a small apartment.
Stage 2: I met Kooikerhondje
When we moved into our own house and our daughter Julie grew a little bit, we were looking for a partner for the forest walks and at horses. And then I met an incredibly nice bitch of the Kooikerhondje, which was totally captivated by me. We were lucky and after half a year of waiting, we had our own boy named Falco at home.
Stage 3: We only want a bro for a walks
We bought a male dog, because we did not plan to breed. But then we tried our first dog show at his 9 months, our Falco won everything he could, including BOB. This started the marathon of successful exhibitions and later Falco became a stud dog. When he was a year and a half, our breeder offered us that we could get an imported dog from Sweden.
Stage 4: It rather looks like a kennel
We decided to go for it and in October 2015 we brought our second male Arto, who is now also a stud dog. As it was not enough, fate has arranged that in February 2017, our pack grew up with Carrija the first-born daughter of our Falco. And finally in 2017 we registered the Aethera kennel.
Stage 5: Our first puppies were born.
15. On May 5, 2021, our first dream puppies were born to us from Carrijka. Carrijka chose a beautiful date and mainly 6 beautiful, healthy puppies were born to her.